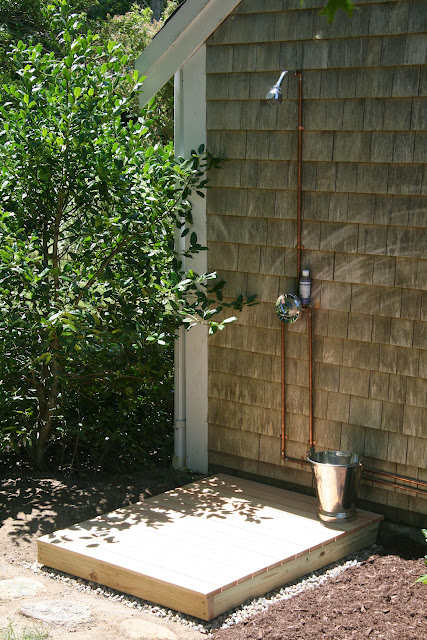 Our first summer vacation project at Old Farm was installing an outdoor shower. I decided it would be placed on a side corner of the house which is near the newer basement hot water heater, most private and at the top of our property slope for good drainage.I called several local plumbers and researched on-line to pick exterior copper piping and a "Symmons" outdoor shower fixture which both came from Home Depot. 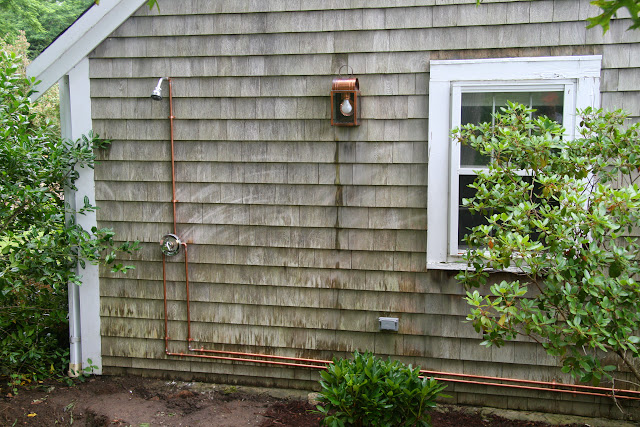 Before starting, I gave away three rose bushes (on craigslist) planted in this space, transplanted a large rhododendron with Bill to our property edge, and filled the remaining space with a compact white rhododendron. The copper pipes leading to the basement were installed on a decline of 1/4" per foot (code requirement) in order to drain easily before winter. 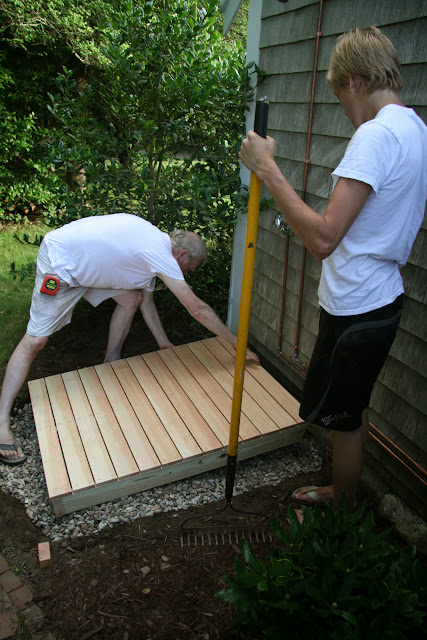 We dug a graded hole about a foot deep with a two foot long trench in the draining direction, and filled it with five wheelbarrows full of Cape Cod stone I had saved from the driveway dressing. I decided on fir decking boards on a pressure treated base Bill built to fit the enclosure we'll eventually add. 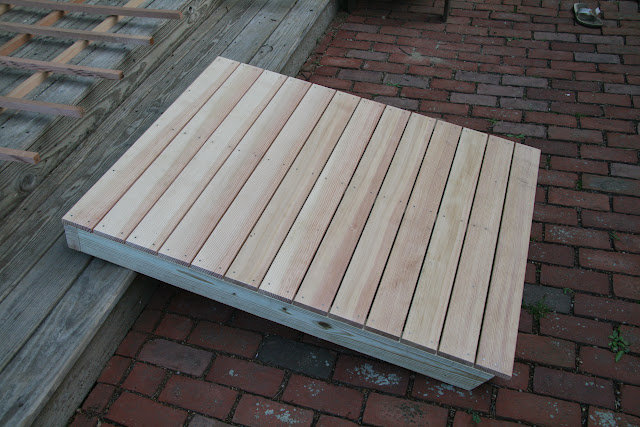 The decking boards are spaced nearly 3/16" apart using wood chips, and fastened with 1 3/4" stainless steel nails. The back of the base has an overhang to accommodate our rock foundation. Materials for the base cost $72, similar costs for the shower were $275 (as compared to about $1000 for both to have done), and took three days to assemble. It seems a great asset to this small house with one bathroom besides being so practical and fun. 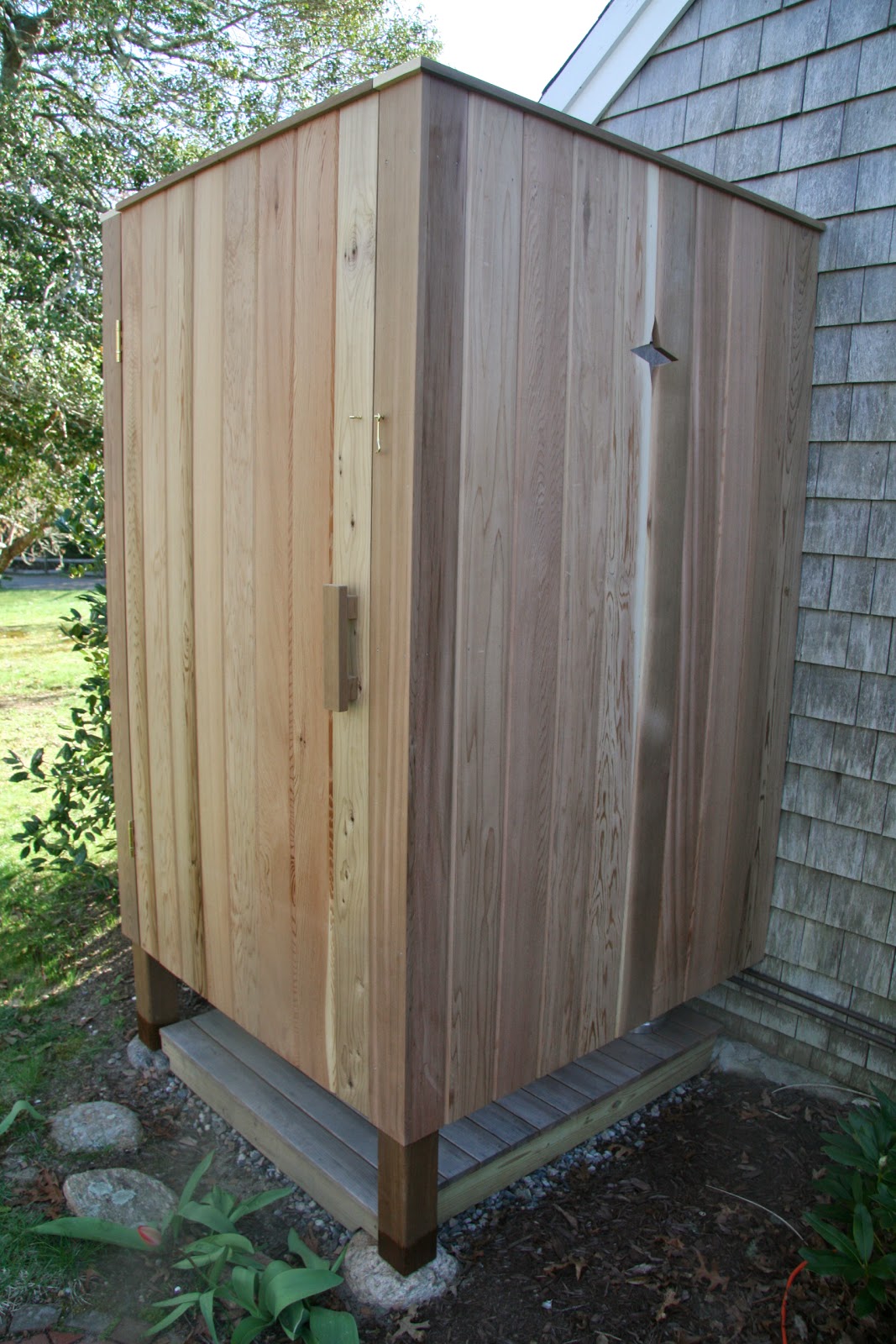 This trip to Old Farm, we brought up the three sides of the outdoor shower I designed for Bill to build at home using all clear cedar wood. We transported the parts on top of our wagon, and took two days to install with trim and coat with clear coat. Here is one side framed with clear cedar, notched for the top adjoining 2" X 4", screwed level into the wall and supported by a foundation stone I stole from our rock wall. Bill pre-drilled the mounting end for easy installation, and pre-soaked the base of the front with sealer for added protection. The photos were shot into a bright, Cape setting sun. 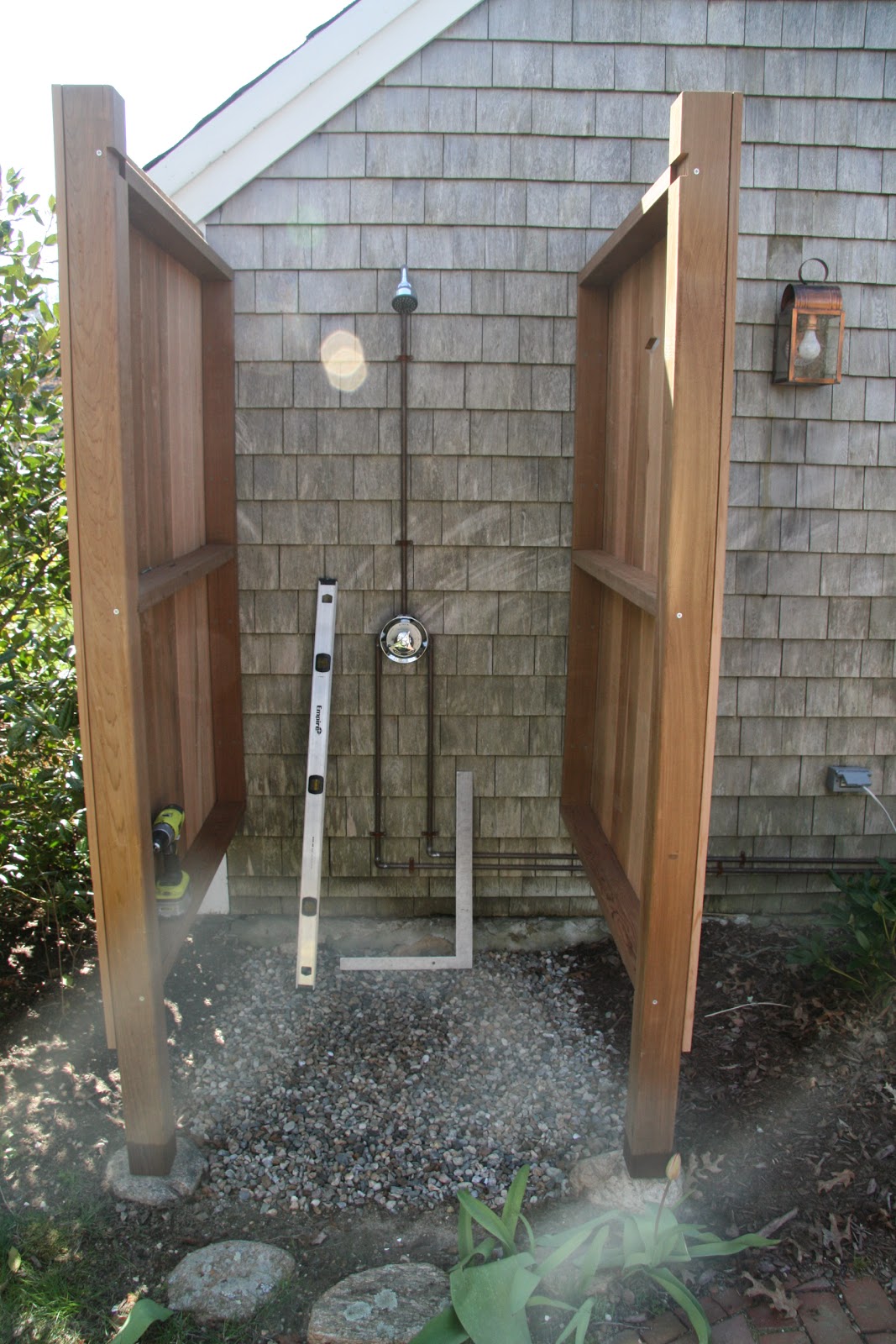 Two sides leveled up, spaced the width of the door plus 1/2" for the hinges and door opening to work freely: 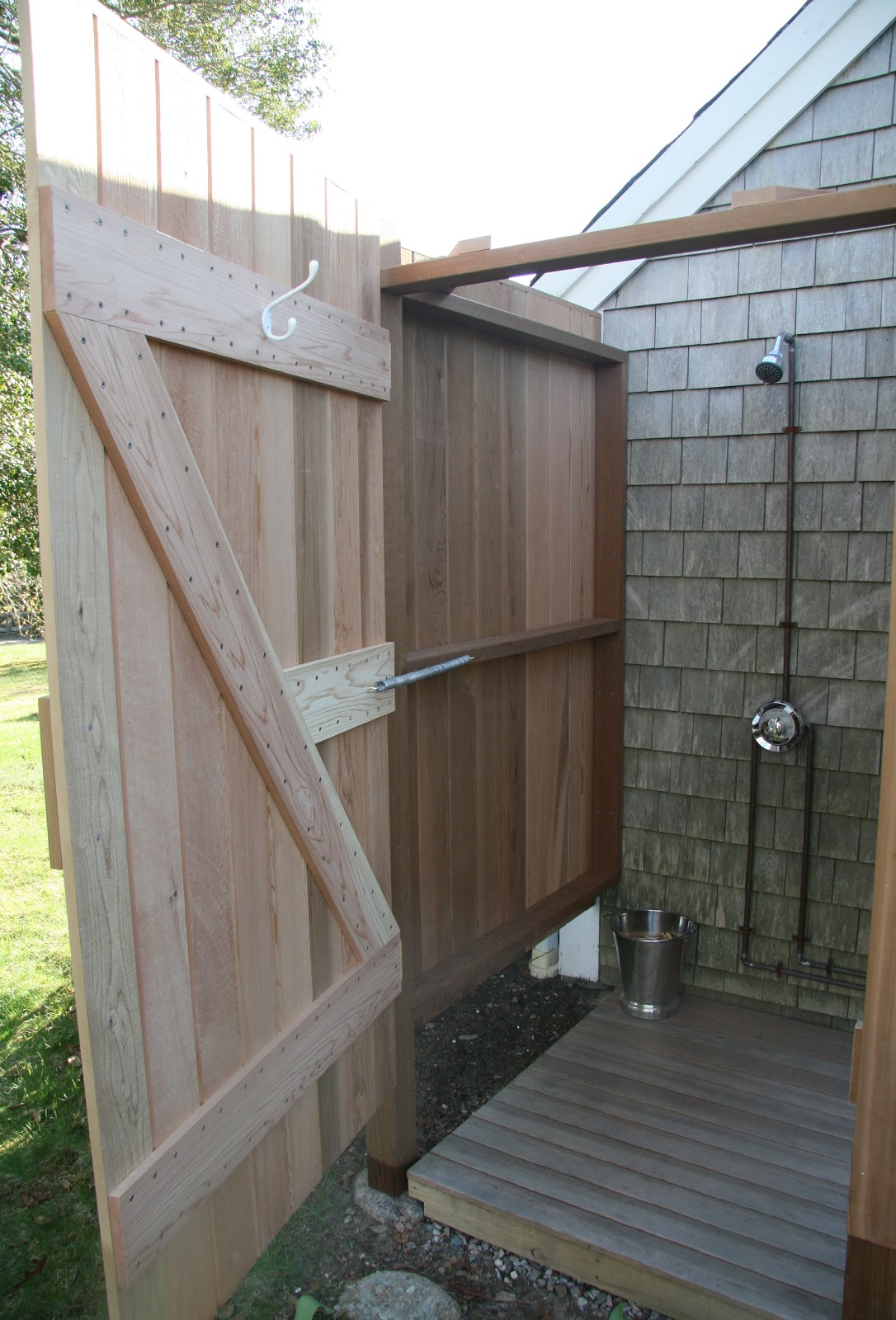 The door was hung after the frame was finished, with two 3" solid brass hinges, and the spring is another old one we found at our local hardware store. Stainless steel nails and screws were used for the assembly. 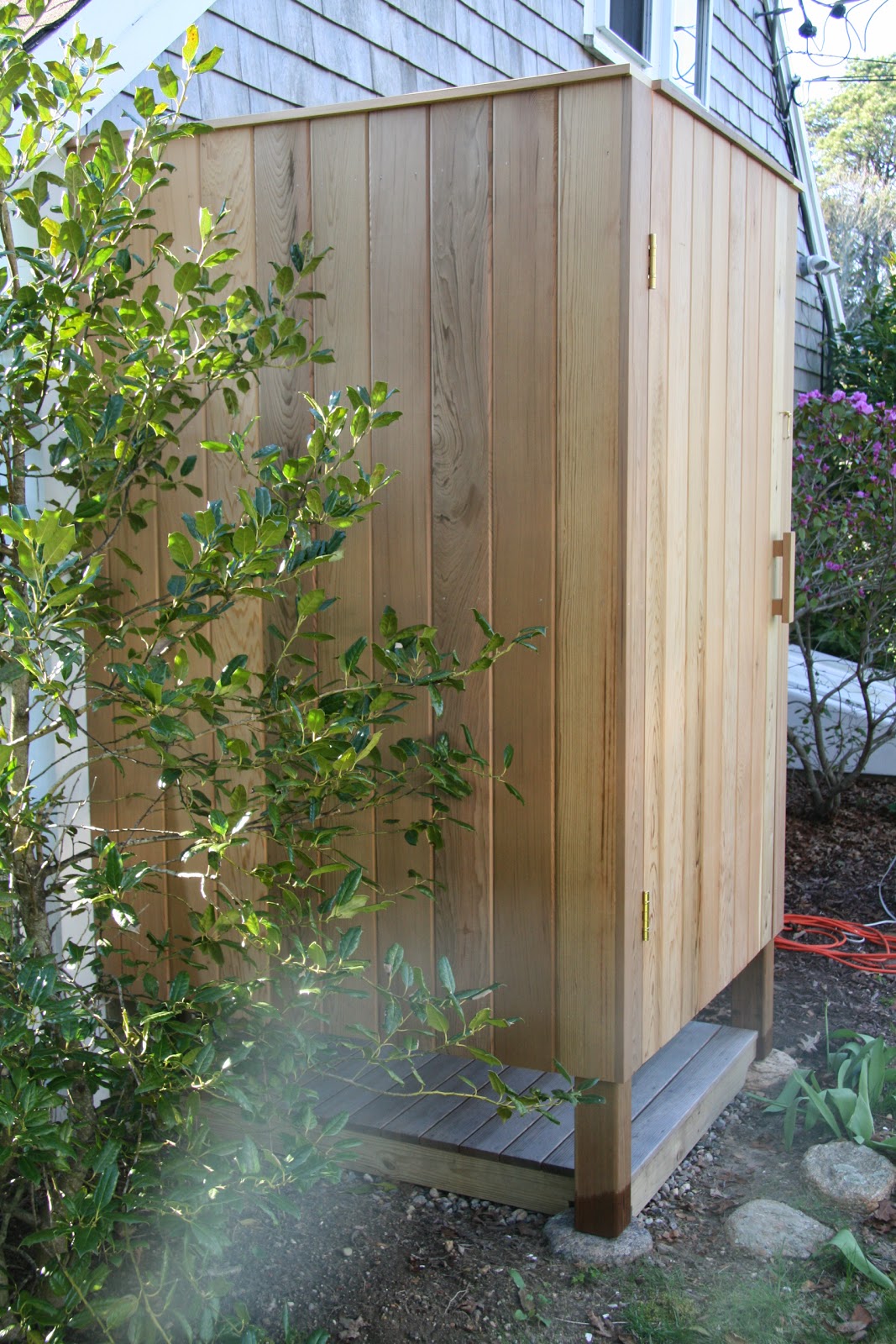 Finally, 1" thick trim was added around the top which overhangs 1/2", and Bill made the solid cedar door handle from leftover wood. 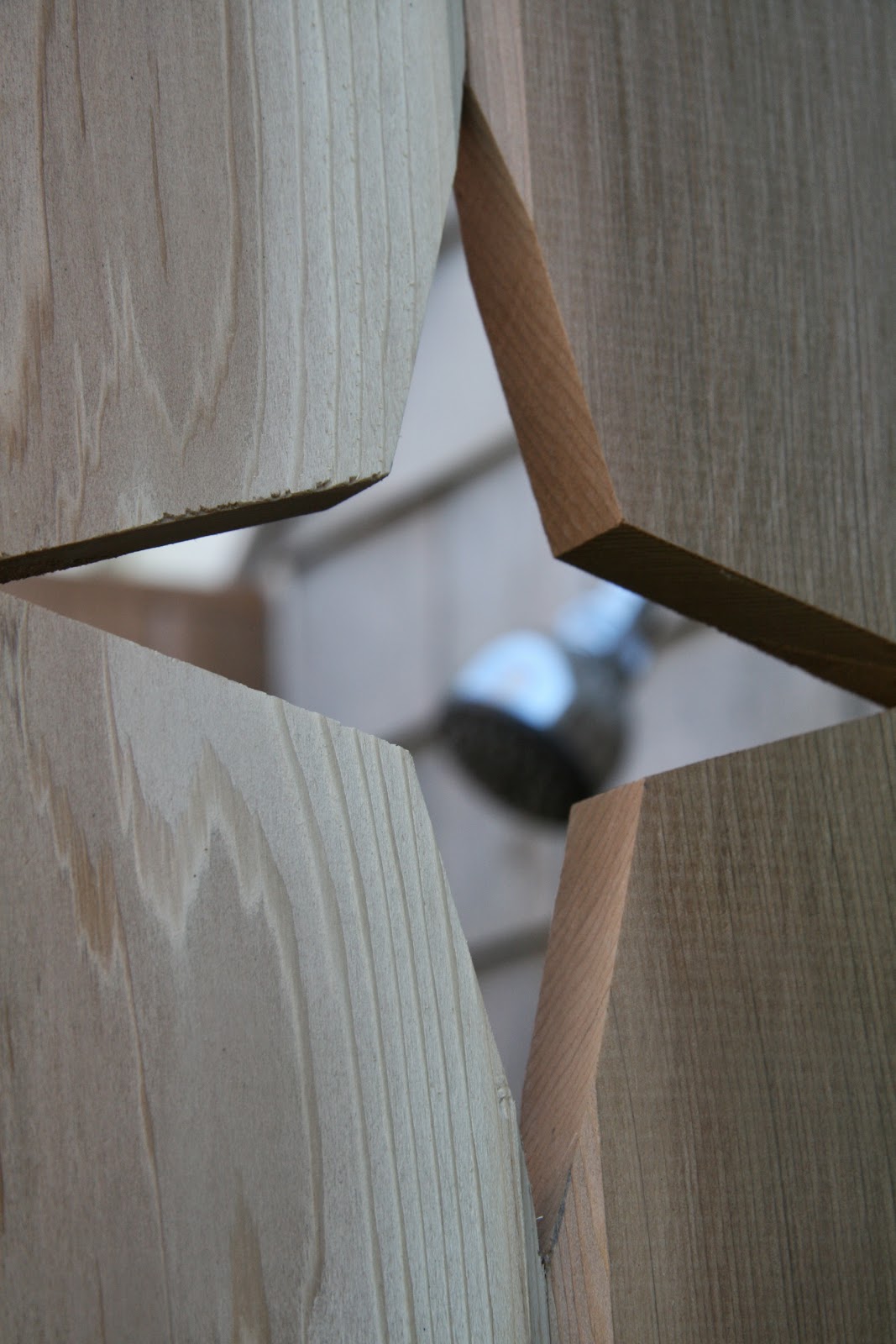 The star, which lines up with the North Star (like the house), was cut on the table saw in between the seam of two centered boards. 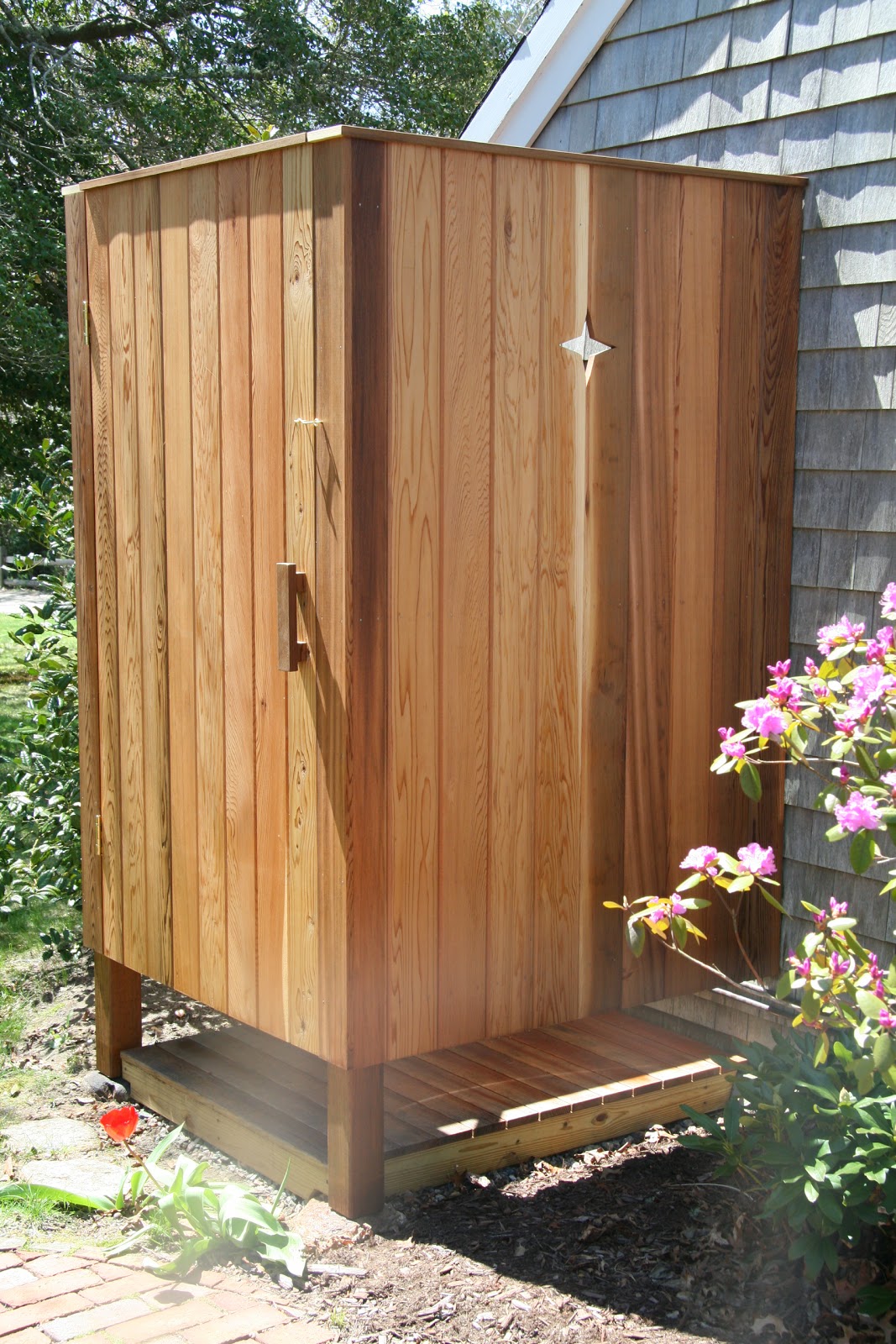 A brass hook and clear coat of sealer were added just before sunset. Using all clear cedar for this 46" X 48" X 7' surround, cost about $650 (builder's cost), but is beautiful to us. 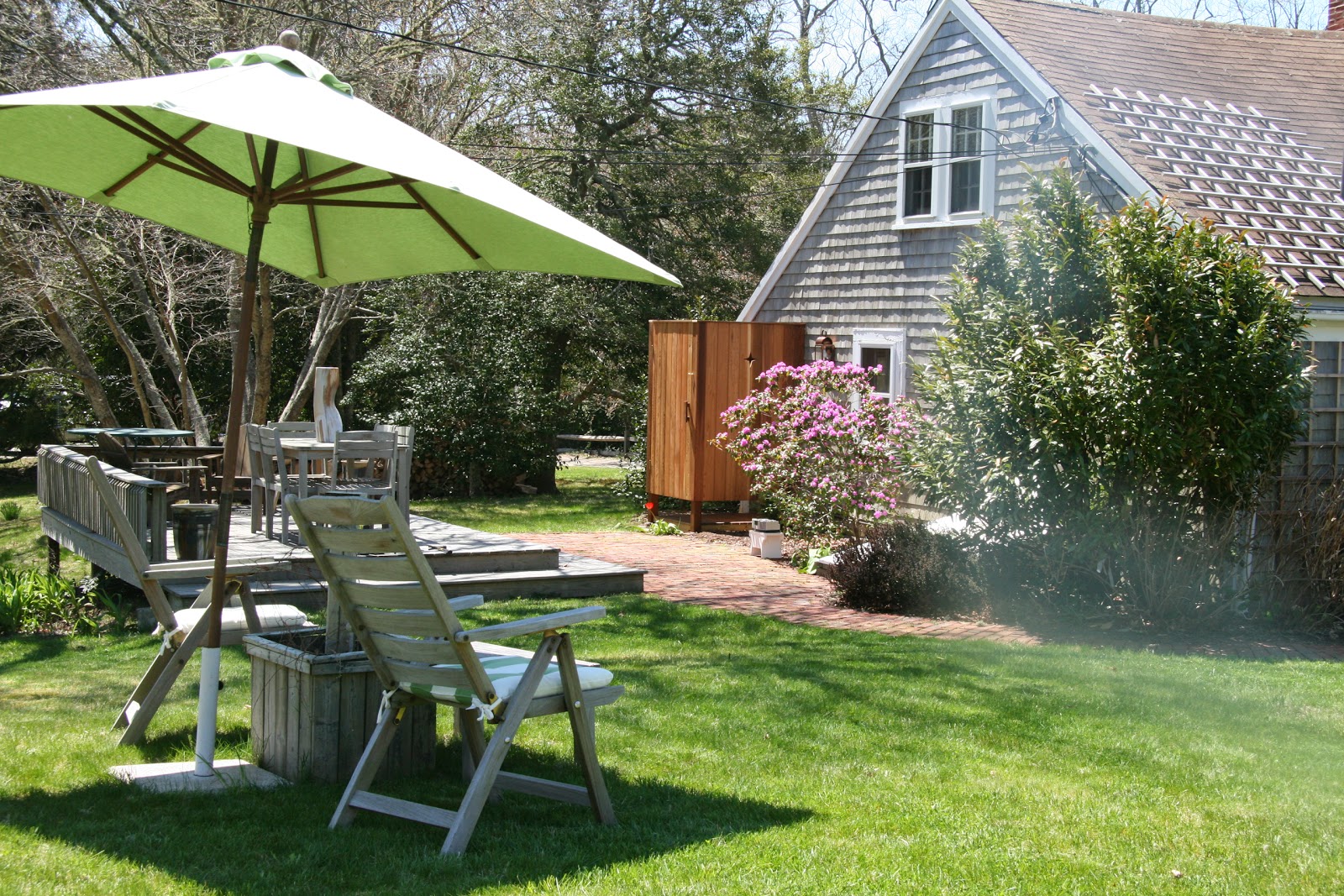